The new Toyota Supra is a Toyota Supra by name only. It uses a BMW-developed chassis, has a BMW engine, a ZF-gearbox, and mostly BMW electronics. Sure, Toyota tweaked the suspension to differentiate its feel from its BMW Z4 sibling but, if you’ve driven the two back-to-back, you’d know they feel mostly the same. Which makes this new video comparison from The Straight Pipes, in which the BMW M240i takes on the Supra, an intra-BMW battle.

To be honest, the only thing that really separates these cars is their chassis. The BMW M240i is built on the latest generation of BMW’s rear-wheel drive CLAR architecture. While the Toyota Supra is built on the bespoke sports car chassis that underpins the Z4. To be honest, the latter is the better chassis; it’s stiffer, lighter, and more dynamic.

However, both cars have the exact same engine; a 3.0 liter turbocharged inline-six with 382 horsepower and 369 lb-ft of torque; the same transmission; an eight-speed ZF automatic; and mostly the same interior technology. But how are they to drive and which one is better? 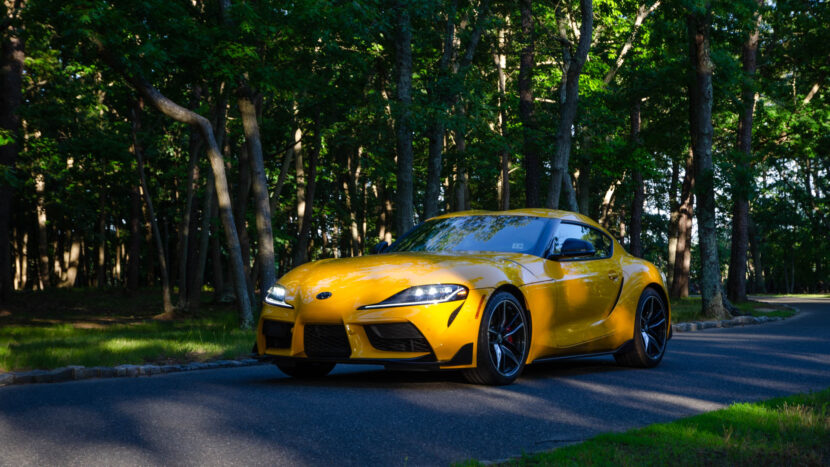 They obviously look very different, too. I’m one of the few enthusiasts that really likes the look of the new 2 Series and thinks the M240i is a cool looking car (especially in Thundernight purple!) but the Supra is just better looking. Its bespoke sports car chassis allows for far more interesting design and the Supra’s incredible hips, its built-in trunk spoiler, double-bubble roof, incredibly short overhangs, and low-sloping nose make it one of the coolest looking sports cars on sale. Be as cynical as you want about the Supra’s badge-engineered existence — which is an entirely reasonable sentiment — but there’s no denying how good it looks.

While the Supra’s only difference is its chassis, it’s actually a massive difference. The steering, balance, and overall feel is better in the Supra, as it is in the M240i. Having driven the M240i and the Supra and the Z4 extensively, I can say I’d drive either of the “Zupra” twins over the M240i any day. But what do the hosts of The Straight Pipes think? Check it out below.

Fri Apr 1 , 2022
PHILADELPHIA (WPVI) — Hackers are increasingly interfering with our lives. They’re constantly probing our financial resources, but also our social media accounts. One local business owner recently had her Facebook account hacked and says it’s been a struggle to get help. Lindsay Liebman’s business Facebook Page, Paper and Posh, is […]