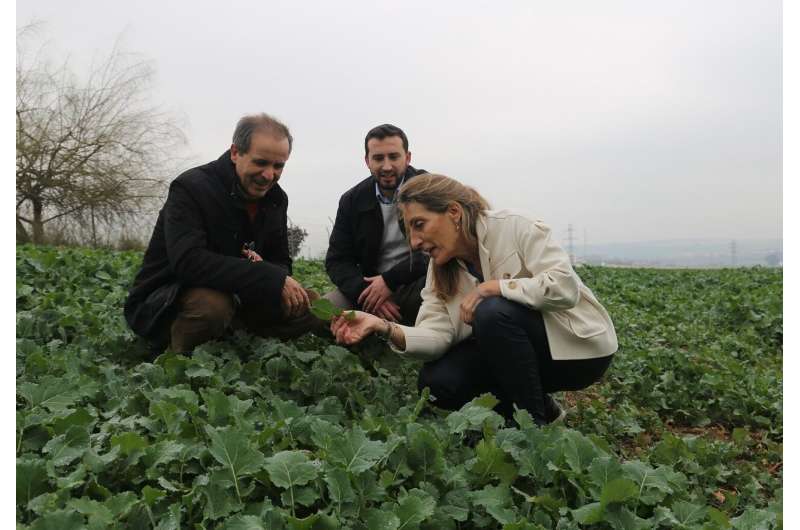 A team from the Department of Agronomy at the UCO has demonstrated, through field tests carried out during 8 agricultural seasons, that foliar feeding with fertilizer increases the concentration of zinc in wheat more than if it is applied to the soil

Micronutrient deficiencies pose health problems for a third of the world’s population. Worldwide, zinc deficits are more problematic in the rural areas of developing countries, where diets are largely limited to vegetable products grown in soils suffering from low nutrient availability. Biofortification, the process of bolstering the nutritional value of crops by increasing the concentration of vitamins and minerals in them, has arisen as a remedy for this problem.

In the search for solutions, the Edaphology Unit of the María de Maeztu Excellence Unit in the Department of Agronomy at the University of Cordoba (DAUCO), headed by the researcher Antonio R. Sánchez Rodríguez, has spent 8 years searching for the best biofortification strategy in terms of applying zinc to wheat grown in calcareous soils in southern Spain.

While application to the soil was not very effective, foliar application, or feeding, was shown to be a very efficient strategy to increase the zinc content in plants, “augmenting the concentration in grains up to 50%,” says the researcher. That is, foliar application was shown to be much more effective, as, with just a tenth of the product (1.28 kg per hectare) better results were obtained than when applied to the soil.

Taking into account the variety of wheat, this direct application to plants was more effective after the start of growth or during flowering.

Nourishing the plant itself, and not the soil, thus, was demonstrated to be an effective way to tackle the problem of zinc deficits in calcareous soils in the short term. In addition, if at some point wheat were purchased based on its nutritional content, growers could see increases in their profits.

This solution “is very valuable for places where there is no other source of zinc in diets, although it would entail adding another task to wheat cultivation, or combining it with the application of other phytosanitary treatments,” notes Sánchez.

On this project the team from the Edaphology Unit also looked for a soil indicator that would help predict the response of durum wheat to zinc fertilization, in terms of its yields. However, they found that conditions in the field make it very difficult to verify this parameter, and that a simple indicator cannot predict this response.

While at the laboratory level some indicators could be defined, in the field this task is difficult, since it is highly dependent on factors such as precipitation, and would require many more years of study.

Thu Apr 15 , 2021
An “exceptional” South Australian wine vintage will soon be on its way to retail shelves. Key points:   SA winemakers say they are having an excellent vintage and that wine will be high-quality   Seasonal conditions in the Clare Valley are the best they’ve been in 10 yearsRelated Posts:For health […]